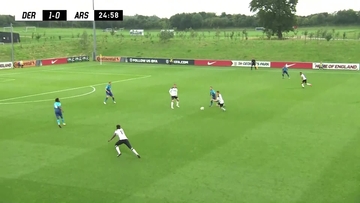 Tricky wideman Kellan Gordon made the most appearances as Derby County’s Under-23s secured their Premier League 2 Division 1 status over the 2016/17 season.

In what was his first year as a professional, the winger missed just one of the Rams’ League fixtures – the 1-0 win over Southampton due to injury – and he capped off a fine personal year by scoring three goals, including a firm strike in the standout 5-3 win over Manchester United and what proved to be the winner against Chelsea on the final day of the season.

Gordon penned his first professional contract with Derby County in October 2015 after a strong start to the 2015/16 season.

The former Stoke City youngster hit the grounding running with the Under-18s squad – impressing in eight of their first nine fixtures – to earn a call up to the then Under-21s matchday squad.

He travelled with the squad to Valencia for a mid-season tour of Spain, but saw his campaign put on a hold after suffering a knee injury.

He returned to help the Under-21s squad claim the Division 2 title upon making his comeback and carried his form on into pre-season ahead of the 2016/17 campaign by representing the first team at Chesterfield.