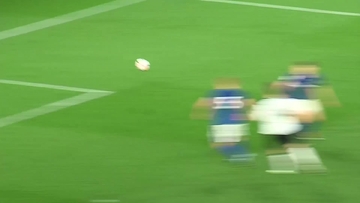 An England Under-17s international, Kyron Stabana continues to impress in the Derby County Academy with every passing season.

Having signed his first professional contract with Derby County in May 2016, the defender has had, and taken, a number of opportunities to impress, both at club and national level, since joining the Rams at the age of seven.

He was a key figure for the Rams’ then Under-21s squad, showing his versatility in both full-back positions, as they were clinched the Division 2 title ahead of Arsenal at the end of the 2015/16 season.

Stabana played a further 12 times in Premier League 2 Division 1 as the Rams avoided relegation and there’s no doubt he would have played a lot more had he not picked up an injury in January.